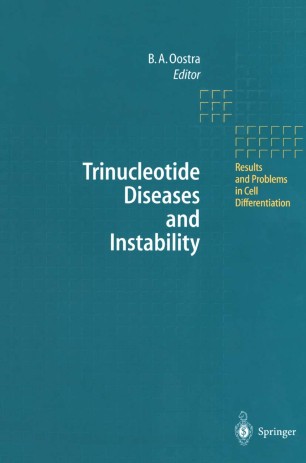 Part of the Results and Problems in Cell Differentiation book series (RESULTS, volume 21)

Till recently, mutations in genes were described in textbooks as deletions or point mutations. These mutations can be inherited from a parent or they are de novo alterations. The discovery in 1991 that human disease can be caused by large-scale ex­ pansion of highly unstable trinucleotide repeats has elucidated a new mutation mechanism, heritable unstable DNA. In the subsequent years more then 10 such disease genes have been identified. All dynamic mutations have been iden­ tified in neurological disorders. There are ten possible trinucleotide repeats at the DNA level, but only 3 have been identified as being involved in human dis­ eases. The rather frequent occurence of triplet repeats in the human genome indicates that other loci subject to unstable expansions may be discovered. The identification of repeat instability and the identification of disease genes containing trinucleotide repeats has helped to answer intriguing questions. The diseases share the unusual characteristic of inheritance with increased disease severity in successive gernerations, a phenomenon called anticipation. Trinu­ cleotide repeat diseases are ideal subjects for direct testing because the muta­ tion is almost exclusively of the same type and there is an extremely low occur­ ance of new mutations in these diseases. The anticipation can now be explained by the correlation of increasing repeat length with increased disease serverity. It can be speculated that other neurological disorders showing anticipation will be caused by unstable repeats as well.