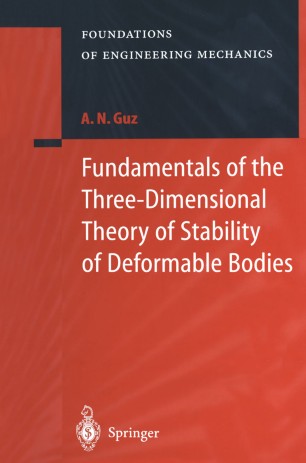 Fundamentals of the Three-Dimensional Theory of Stability of Deformable Bodies

At the present time stability theory of deformable systems has been developed into a manifold field within solid mechanics with methods, techniques and approaches of its own. We can hardly name a branch of industry or civil engineering where the results of the stability theory have not found their application. This extensive development together with engineering applications are reflected in a flurry of papers appearing in periodicals as well as in a plenty of monographs, textbooks and reference books. In so doing, overwhelming majority of researchers, con­ cerned with the problems of practical interest, have dealt with the loss of stability in the thin-walled structural elements. Trying to simplify solution of the problems, they have used two- and one-dimensional theories based on various auxiliary hypotheses. This activity contributed a lot to the preferential development of the stability theory of thin-walled structures and organisation of this theory into a branch of solid mechanics with its own up-to-date methods and trends, but left three-dimensional linearised theory of deformable bodies stability (TL TDBS), methods of solving and solutions of the three-dimensional stability problems themselves almost without attention. It must be emphasised that by three­ dimensional theories and problems in this book are meant those theories and problems which do not draw two-dimensional plate and shell and one-dimensional rod theories.