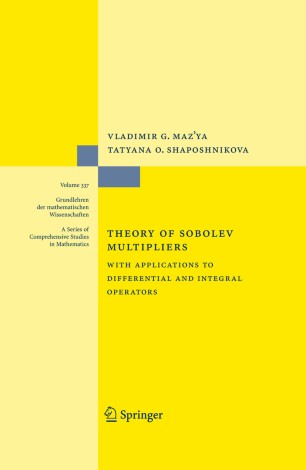 With Applications to Differential and Integral Operators

The purpose of this book is to give a comprehensive exposition of the theory of pointwise multipliers acting in pairs of spaces of differentiable functions. The theory was essentially developed by the authors during the last thirty years and the present volume is mainly based on their results.

Part II concerns several applications of this theory: continuity and compactness of differential operators in pairs of Sobolev spaces, multipliers as solutions to linear and quasilinear elliptic equations, higher regularity in the single and double layer potential theory for Lipschitz domains, regularity of the boundary in $L_p$-theory of elliptic boundary value problems, and singular integral operators in Sobolev spaces.

Vladimir Maz'ya is a professor at the University of Liverpool and professor emeritus at Linkoeping University, a member of the Royal Swedish Academy of Sciences. In 2004 he was awarded the Celsius medal in gold for his outstanding contributions to the theory of partial differential equations and hydrodynamics. Maz'ya published over 400 papers and 15 books in various domains of the theory of differential equations, functional analysis, approximation theory, numerical methods, and applications to mechanics and mathematical physics (for more information see www.mai.liu.se/~vlmaz).

Tatyana Shaposhnikova is a professor at Linkoeping University. She works in function theory, functional analysis and their applications to partial differential and integral equations. The list of her publications contain three books and more than 70 articles. Together with V. Maz'ya she was awarded the Verdaguer Prize of the French Academy of Sciences in 2003 (for more information see www.mai.liu.se/~tasha).

“This very interesting book … collects the multitude of new results in this area, essentially obtained by the authors or inspired by their work during the past thirty years. … This comprehensive monograph is very well written and structured. It will certainly become an extremely useful reference for mathematicians working in functional analysis and in the theories of partial differential, integral, and pseudodifferential operators. … it recommendable both for experts and mathematicians with a wider field of interest.” (Dorothee D. Haroske, Mathematical Reviews, Issue 2010 d)

“The main goal of Sobolev Multipliers is to present complete characterizations and applications of multipliers Mf acting from a Sobolev space … . it will be of interest to a great variety of serious readers, from graduate students to experts in analysis … as well as mathematical physicists, differential geometers, and applied mathematicians. … a valuable reference and guide to the literature, as well as a unique collection of methods and results–indispensable for anyone who is using Sobolev spaces in their work.” (I. E. Verbitsky, Bulletin of the American Mathematical Society, Vol. 48 (1), January, 2011)