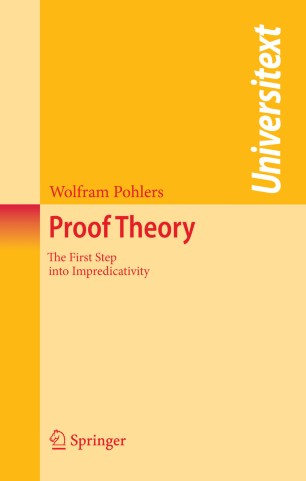 The First Step into Impredicativity

This book verifies with compelling evidence the author’s intent to "write a book on proof theory that needs no previous knowledge of proof theory". Avoiding the cryptic terminology of proof theory as far as possible, the book starts at an elementary level and displays the connections between infinitary proof theory and generalized recursion theory, especially the theory of inductive definitions. As a "warm up" Gentzen's classical analysis of pure number theory is presented in a more modern terminology, followed by an explanation and proof of the famous result of Feferman and Schütte on the limits of predicativity. The author also provides an introduction to ordinal arithmetic, introduces the Veblen hierarchy and employs these functions to design an ordinal notation system for the ordinals below Epsilon 0 and Gamma 0, while emphasizing the first step into impredicativity, that is, the first step beyond Gamma 0. This is first done by an analysis of the theory of non-iterated inductive definitions using Buchholz’s improvement of local predicativity, followed by Weiermann's observation that Buchholz’s method can also be used for predicative theories to characterize their provably recursive functions. A second example presents an ordinal analysis of the theory of $/Pi_2$ reflection, a subsystem of set theory that is proof-theoretically equivalent to Kripke-Platek set.

The book is pitched at undergraduate/graduate level, and thus addressed to students of mathematical logic interested in the basics of proof theory. It can be used for introductory as well as more advanced courses in proof theory.