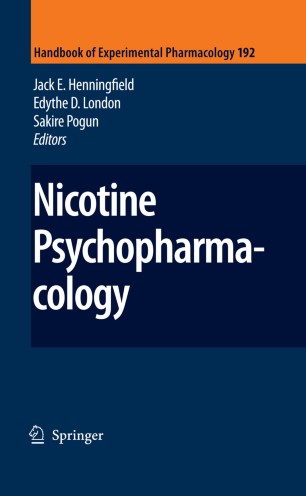 The fact that tobacco ingestion can affect how people feel and think has been known for millennia, placing the plant among those used spiritually, honori?cally, and habitually (Corti 1931; Wilbert 1987). However, the conclusion that nicotine - counted for many of these psychopharmacological effects did not emerge until the nineteenth century (Langley 1905). This was elegantly described by Lewin in 1931 as follows: “The decisive factor in the effects of tobacco, desired or undesired, is nicotine. . . ”(Lewin 1998). The use of nicotine as a pharmacological probe to und- stand physiological functioning at the dawn of the twentieth century was a landmark in the birth of modern neuropharmacology (Limbird 2004; Halliwell 2007), and led the pioneering researcher John Langley to conclude that there must exist some “- ceptive substance” to explain the diverse actions of various substances, including nicotine, when applied to muscle tissue (Langley 1905). Research on tobacco and nicotine progressed throughout the twentieth century, but much of this was from a general pharmacological and toxicological rather than a psychopharmacological perspective (Larson et al. 1961). There was some attention to the effects related to addiction, such as euphoria (Johnston 1941), tolerance (Lewin 1931), and withdrawal (Finnegan et al. 1945), but outside of research supported by the tobacco industry, addiction and psychopharmacology were not major foci for research (Slade et al. 1995; Hurt and Robertson 1998; Henning?eld et al. 2006; Henning?eld and Hartel 1999; Larson et al. 1961).