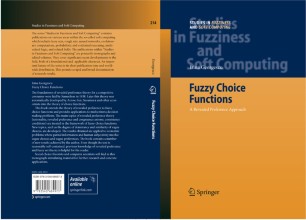 Part of the Studies in Fuzziness and Soft Computing book series (STUDFUZZ, volume 214)

The foundations of revealed preference theory for a competitive consumer were laid by Samuelson in 1938. Later this theory was axiomatically developed by Arrow, Sen, Suzumura and other economists into the theory of choice functions.

Social choice theorists and computer scientists will find in this monograph stimulating material for further research and concrete applications.