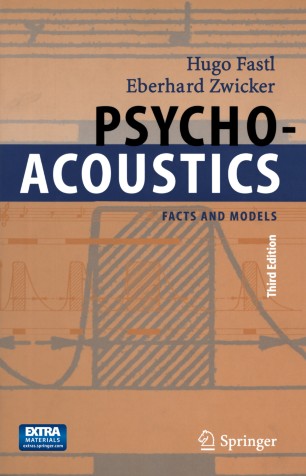 Psychoacoustics – Facts and Models offers a unique, comprehensive summary of information describing the processing of sound by the human hearing system. It includes quantitative relations between sound stimuli and auditory perception in terms of hearing sensations, for which quantitative models are given, as well as an unequalled collection of data on the human hearing system as a receiver of acoustic information. In addition, many examples of the practical application of the results of basic research in fields such as noise control, audiology, or sound quality engineering are detailed. The third edition includes an additional chapter on audio-visual interactions and applications, plus more on applications throughout. Reviews of previous editions have characterized it as "an essential source of psychoacoustic knowledge," "a major landmark ," and a book that "without doubt will have a long-lasting effect on the standing and future evolution of this scientific domain."

Hugo Fastl is Professor of Technical Acoustics in the Faculty of Electrical Engineering and Information Technology at the Technical University München, Germany. He graduated 1969 in Music from the Academy of Music München, and 1970, 1974, and 1981 he earned at the Technical University München the degrees of Dipl.-Ing., Dr.-Ing., and Dr.-Ing. habil., respectively. His research interests are basic psychoacoustics and its applications in fields like audio-communication, noise control, sound quality design, audiology, or music. In 1987 he was elected Guest Professor of Osaka University, Japan, and in 1990 he became a Fellow of the Acoustical Society of America. He is head of the committee "Auditory Acoustics" of the Society for Information Technology (ITG), and with the German Acoustical Society (DEGA) he is member of the Board of Directors, and Treasurer. In 1983 he won the Award of the Society for Information Technology (ITG), in 1991 the Research Award in Audiology of the Forschungsgemeinschaft Deutscher Hörgeräte-Akustiker, in 1998 the Research Award of the Japan Society for the Promotion of Science (JSPS), and in 2003 the Rayleigh Medal of the Institute of Acoustics (UK).

Eberhard Zwicker was one of the worlds top authorities in psychoacoustics. In his labs in Stuttgart and München he educated scientists and engineers who hold now key positions in basics and applications of (psycho-)acoustics. From his many honors, the Silver Medal of the Acoustical Society of America and the degree of Honorary Member of the Audio Engineering Society are among the more outstanding.