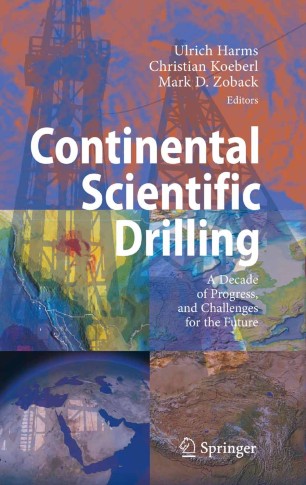 A Decade of Progress, and Challenges for the Future

Scientific drilling is an indispensable tool of modern Earth science - search, as it provides the only means of obtaining direct information on processes operating at depth. Drilling allows for the determination of - situ properties of solid materials and fluids and permits testing of hypot- ses and models derived from surface observations. In addition, drill holes may be used as a natural laboratory for experiments and as observatories for long-term monitoring of on-going active processes. Earth drilling, therefore, plays a critical role in scientific research directed towards - proved understanding of the workings of our planet and has a key role in solving urgent socio-economic problems. As a rule, drilling projects are an integral component of major geosci- tific research programs, comprising comprehensive pre-site investigations, accompanying laboratory studies, the drilling phase itself, and consecutive measurements and tests in the drill hole. Such drilling programs are costly and thus only realizable to a limited extent. International cost sharing, the optimal utilization of all available resources, the incorporation of inter- tional leading experts, and the application of the existing know-how, as well as the selection of an optimal drilling location (“World Geological Site”), are thus essential elements of an international scientific drilling p- gram.

Christian Koeberl studies impact craters, geochemistry, and planetary geology at the University of Vienna, Austria. He is principal investigator of several deep-drilling projects at impact structures, was the chairman of the European Science Foundation "Impact" program, and is a member of the ICDP science advisory group.

Mark D. Zoback is a leading expert in geomechanics who specializes on issues related to the state of stress in the earth's crust. He is Professor of Geophysics at Stanford University and principal investigator in many scientific deep-drilling projects around the world, including the San Andreas Fault Zone Observatory at depth. From 2000 to 2006 he was the chairman of the ICDP science advisory group.