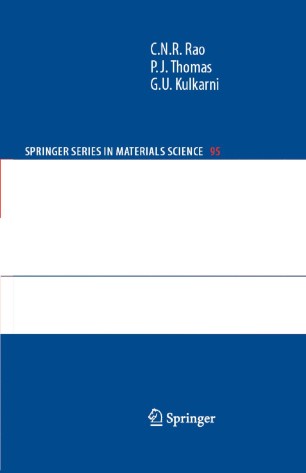 Nanocrystals and Their Mesoscopic Organization is an up-to-date monograph on an important aspect of nanoscience and technology. It opens with an elegant introduction including a brief historical account. Emphasis is then given to diverse synthetic methods, both chemical and physical, in addition to modern hybrid methods. The orientation shifts gradually to properties of nanocrystals that evolve with size; detailed discussions are to be found on mesoscalar assemblies in different dimensions, special cases of core-shell and magic nuclearity nanocrystals. The authors also address applications of nanocrystals, carefully separating out potential applications and those that have already emerged, and cite around 900 references from the literature, most from the last decade. Tables providing information at a glance and schematic diagrams at relevant places, make the monograph appealing to read. Occasionally, the reader is reminded of the contributions of celebrated past masters such as Michael Faraday. In summary, the monograph serves as a general introduction as well as a handy reference for the entire community of researchers and practitioners.

Prof. C. N. R. Rao has published around 1400 Research papers and 36 books (edited or authored) in a career spanning 50 years. His books have been translated into other languages and several have grown to include several editions. He is widely recognized and is a member of all major science academies. He has been honoured with 34 Honoris Causa doctorate degrees from universities around the world. He is currently the President of the Third World Academy of Science. He was formerly the President of the International Union of Pure and Applied Chemistry. He has won numerous other International and National awards, a recent one being the Somiya award from the IUMRS (April, 2004).

Dr. P. John Thomas obtained his Ph.D. recently from JNCASR, working in the field of nanocrystals and is currently a Research Associate in the same place.

Dr. G. U. Kulkarni is an Associate Professor at JNCASR. He has over 100 publications to his credit. He is working in the field of nanocrystals for the past ten years or so.