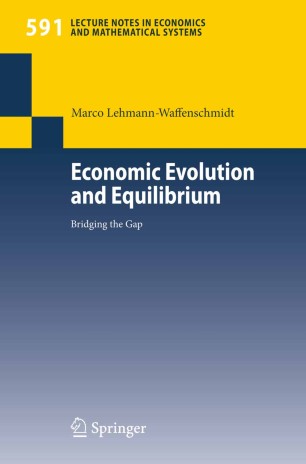 theory,whichformalizesa dynamiceconomicsystemasa systemofdi?erence, or di?erential, equations. There equilibria mean ‘equilibrium trajectories’ of the whole evolution that, in a certain sense, are optimal. A particularly un- tisfactory feature of this conceptualization of an equilibrium, however, is the factthattheintertemporaloptimizingapproachcompletelypredeterminesthe whole future of the economic system. This “closed loop” approach gives rise to the common reproach that economic theory is predominantly concerned with the question of ‘how the economic system ought to behave’ rather than with the question of ‘how does it behave actually’. This is the point at which the new branch of evolutionary economics has made its entrance. In contrast to growth or business cycle theory, evolutionary economics perceives the evolution of the economic system as essentially “open” to true novelties that are unforeseeable by their very nature. This view clearly makes obsolete any conception of equilibrium that resorts to the idea of a ?nal state of rest, or to the idea of an intertemporally optimizing trajectory which is prespeci?ed ab initio by a system of di?erential equations and initial con- tions. To be sure, there have been attempts to reconceptualize the notion of equilibrium from the evolutionary viewpoint. However, these proposals also appear, in one way or another, to hinge on the ideas of rest. This parti- larly applies to the branch of nonlinear dynamics and deterministic chaotic motion.