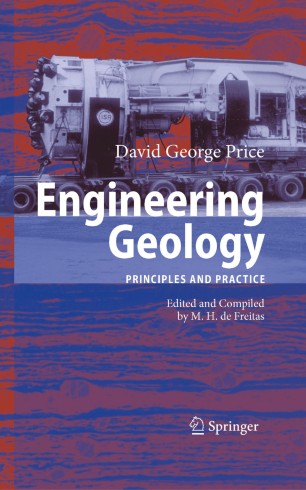 David Price had written the greater part of this book by the time he died; it has been completed by his colleagues as a tribute to the many contributions he made to the subject of engineering geology through his professional and academic life. David graduated from the University of Wales in 1954 with the degree of Geology with Mathematics and Physics, joined the Overseas Division of the Geological Survey and was despatched to what was then British Guiana, to map economic mineral reserves and construction materials. He returned to the UK in 1958 to join the construction company George Wimpey. The post-war boom was beginning and David was engaged as an engineering geologist. In those days industry appreciated the need for research, as little was known for the tasks that had to be completed, and David joined a remarkable group of scientists and engineers at Wimpey’s Central Laboratory at Hayes; the young reader can best visualise this as an ”industrial university”. At that time formal education and training in engineering geology did not exist and as David recalled ”… no one really knew what they were doing; we followed the principles of our subject, used common sense, learnt from what happened on site and talked to those who seemed to know more than we on the subject in hand. ” It was David’s generation that established ”Engineering Geology”, as we now know it, in the UK and he played a full part in its foundation.