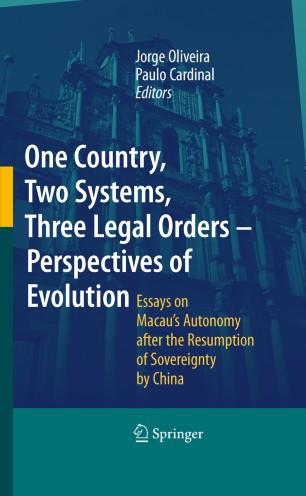 “One Country, Two Systems, Three Legal Orders” – Perspectives of Evolution – : Essays on Macau’s Autonomy after the Resumption of Sovereignty by China” can be said, in a short preamble-like manner, to be a book that provides a comprehensive look at several issues regarding public law that arise from, or correlate with, the Chinese apex motto for reunification – One Country, Two Systems – and its implementation in Macau and Hong Kong. Noble and contemporary themes such as autonomy models and fundamental rights are thoroughly approached, with a multilayered analysis encompassing both Western and Chinese views, and an extensive comparative law acquis is also brought forward. Furthermore, relevant issues on international law, criminal law, and historical and comparative evolutions and interactions of different legal s- tems are laid down in this panoramic, yet comprehensive book. One cannot but underline the presence, in the many approaches and comments, of a certain aura of a modern Kantian cosmopolitanism revisitation throughout the work, especially when dealing with the cardinal principle of «One Country, Two Systems», which enabled a peaceful and integral reunification ex vi international law – the Joint Declarations – that ended an external and distant control.