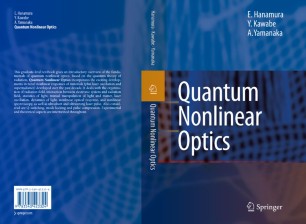 This graduate-level textbook gives an introductory overview of the fundamentals of quantum nonlinear optics. Based on the quantum theory of radiation, Quantum Nonlinear Optics incorporates the exciting developments in novel nonlinear responses of materials (plus laser oscillation and superradiance) developed over the past decade. It deals with the organization of radiation field, interaction between electronic system and radiation field, statistics of light, mutual manipulation of light and matter, laser oscillation, dynamics of light, nonlinear optical response, and nonlinear spectroscopy, as well as ultrashort and ultrastrong laser pulse. Also considered are Q-switching, mode locking and pulse compression. Experimental and theoretical aspects are intertwined throughout.

"The book represents a fairly attempt to offer a modern graduate-level introductory overview to a number of phenomena and applications of nonlinear quantum optics. It can addressed to theoretical and experimental physicists and engineers … . The book thus touches several aspects, introducing to both well-established and timely topics. … a good choice for opening up quantum nonlinear optics to beginners, owing to the presence of both standard background material and a comprehensive up-to-date outlook to some of its trends." (Guilio Landolfi, Zentralblatt MATH, Vol. 1122 (24), 2007)