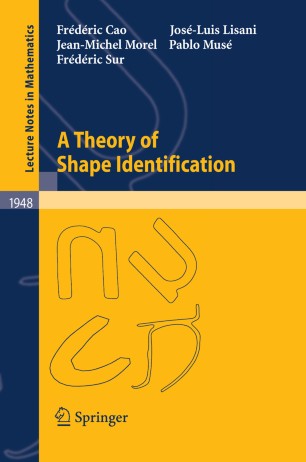 A Theory of Shape Identification

Recent years have seen dramatic progress in shape recognition algorithms applied to ever-growing image databases. They have been applied to image stitching, stereo vision, image mosaics, solid object recognition and video or web image retrieval. More fundamentally, the ability of humans and animals to detect and recognize shapes is one of the enigmas of perception.

The book describes a complete method that starts from a query image and an image database and yields a list of the images in the database containing shapes present in the query image. A false alarm number is associated to each detection. Many experiments will show that familiar simple shapes or images can reliably be identified with false alarm numbers ranging from 10-5 to less than 10-300.

Technically speaking, there are two main issues. The first is extracting invariant shape descriptors from digital images. The second  is deciding whether two shape descriptors are identifiable as the same shape or not. A perceptual principle, the Helmholtz principle, is the cornerstone of this decision.

These decisions rely on elementary stochastic geometry and compute a false alarm number. The lower this number, the more secure the identification. The description of the processes, the many experiments on digital images and the simple proofs of mathematical correctness are interlaced so as to make a reading accessible to various audiences, such as students, engineers, and researchers.

Jean-Michel Morel (PhD 1980) is Professor of Applied Mathematics at the Ecole Normale Supérieure de Cachan since 1997. He started his career in 1979 as assistant professor in Marseille Luminy, then moved in 1984 to University Paris Dauphine where he was promoted professor in 1992. His research is focused since 1990 on the mathematical analysis of image analysis and processing. He has received the Philip Morris Prize of Mathematics (1991), the Junior Institut Universitaire de France (1992), Prix Sciences et Défense (1996), Classe exceptionnelle 2001 and three IEEE best paper awards (ICIP 97, ICASSP 05, and CVPR 05.) He has coauthored with S. Solimini a book on Variational Methods in Image Segmentation (Birkhäuser 1994) and with Agnès Desolneux and Lionel Moisan a book on Computation Gestalt Theory (Springer, 2008). He has advised 31 PhD’s and is associate editor of five journals in applied mathematics and image analysis. He is also the editor in charge of Applied Mathematics for Springer Lecture Notes of Mathematics. Since 2002, Jean-Michel Morel belongs to the ISI list of highly cited mathematicians (http://isihighlycited.com/).

Frédéric Sur is assistant professor of mathematics and computer science at Ecole des Mines de Nancy and conducts his research at Loria laboratory. His research interest is computer vision, from low-level features definition to structure and motion problems. He defended his PhD thesis in applied mathematics and image analysis in 2004 at Ecole Normale Supérieure de Cachan. Then he held a postdoctoral position on statistical learning theory at Loria.

José-Luis Lisani received the Ph.D.degree on applied mathematics by the Universities of Paris-Dauphine (France) and of Illes Balears (Spain) in 2001. He is currently assistant professor of applied mathematics at the University of Illes Balears (Spain) and collaborates with the CMLA laboratory at ENS Cachan (France) and Cognitech Inc. (USA). His current research interests include image and video processing with applications to video-surveillance, database indexing and 3D images analysis.

Pablo Musé received the Ph.D. degree in applied mathematics from Ecole Normale Supérieure de Cachan, France, in 2004. From 2005 to 2006 he was with Cognitech, Inc., Pasadena, CA, USA, where he worked on computer vision and image processing applications. Then he held a postdoctoral position on applied mathematics at the Seismological Laboratory, California Institute of Technology. Since 2008, he has been an assistant professor of electrical engineering at the Facultad de Ingeniería, Universidad de la República, Uruguay. His research interests include signal and image processing and analysis.

Frédéric Cao is researcher in applied mathematics and computer vision, with INRIA, France. He obtained a PhD in 2000, then successively worked for the French Defence Agency, INRIA (National Institute of research in Computer Science), Cognitech Inc. He is currently with DxO Labs, as Research Director. His topics of research are shape recognition, motion analysis or digital photography. He is author of a book on geometric curve evolution and image processing, published as a volume of Lecture Notes in Mathematics, Springer.