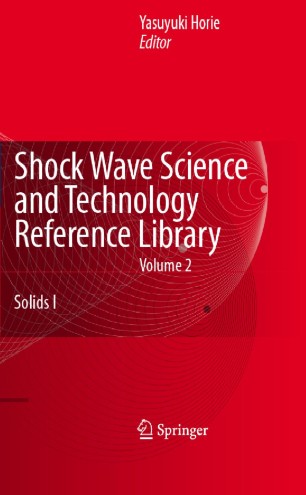 This book is the first of several volumes on solids in the Shock Wave Science and Technology Reference Library. These volumes are primarily concerned with high-pressure shock waves in solid media, including detonation, high-velocity impact, and penetration. Of the eight chapters in this volume three chapters survey recent, exciting experimental advances in

- Z accelerator for ICE and Shock compression (M.D. Knudson), and

The subsequent four chapters are foundational, and cover the subjects of

The last chapter, but not the least, describes a tour de force illustration of today’s computing power in

All chapters are each self-contained, and can be read independently of each other, though they are of course thematically interrelated. They offer a timely reference, for beginners, as well as professional scientists and engineers, on the foundations of shock waves in solids with new viewpoints, and on the burgeoning developments.