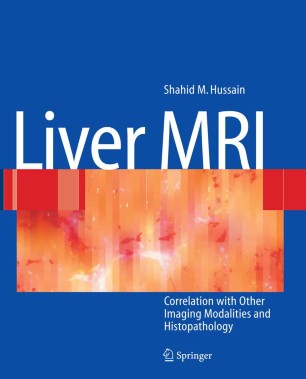 Correlation with Other Imaging Modalities and Histopathology

In March 1973, a short paper was published in Nature, entitled „Image formation by induced local int- action; examples employing nuclear magnetic resonance. “ The author was Paul C. Lauterbur, a Prof- sor of Chemistry at the State University of New York at Stony Brook. In this seminal manuscript the - thor described a new imaging technique which moved the single dimension of NMR spectroscopy to the dual dimension of spatial orientation, thereby resulting in the foundation of modern magnetic re- nance (MR) imaging. Over the ensuing years, MR imaging has assumed an increasingly important role in clinical imaging. It distinguishes itself from other imaging modalities, such as ultrasound (US) or computed tomography (CT), by the unique ability to visualize specific tissue components in a non-- vasive manner. In the earlier days, diagnostic MR imaging was limited to cerebral and musculoskeletal diseases. - aging of other areas which are more prone to movement through breathing (abdominal) or pulsation motions (cardiac) became available more recently, with the introduction of faster sequences and the - velopment of more dedicated MR imaging coils. Currently, liver MRI is considered the cornerstone of abdominal imaging. In most centers, however, liver MRI is still employed largely as a problem solving modality, when US and CT have provided an unsatisfactory outcome.