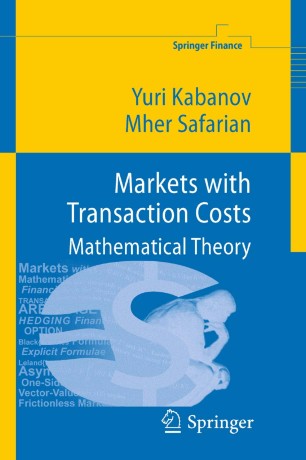 The central mathematical concept in the theory of frictionless markets is a martingale measure. In this, the first monograph devoted to the theory of financial markets with transaction costs, the authors argue that, for financial markets with proportional transaction costs, this concept should be replaced by that of the consistent price system, which is a martingale evolving in the duals to the solvency cones. Three main subjects are considered:

1. The Leland approach to the hedging of contingent claims based on approximate replication.

2. Arbitrage theory for markets with proportional transaction costs based on a geometric approach.

The first part contains recent findings on hedging errors and limit theorems for Leland-type strategies. The rigorous mathematical analysis presented in the book is designed to serve as a platform for further studies.

The second part includes a chapter on the arbitrage theory for frictionless markets in discrete time. It is presented as an introduction to the theory of markets with transaction costs, but can also be read independently. The main subjects of the second part are no-arbitrage criteria and hedging theorems for European and American options under transaction costs. In contrast to the classical theory, the value processes are vector-valued and the concept of the martingale measure is replaced by the concept of the consistent price system. Hedging theorems give dual descriptions of the set of initial endowments needed to super-replicate contingent claims. These descriptions are expressed in terms of consistent price systems. This volume provides a detailed study of various new phenomena arising in the presence of market friction in discrete and continuous time. The mathematics needed is a synthesis of ideas from finite-dimensional geometry, geometric functional analysis, and general theory of stochastic processes.

The third part deals with the optimal control of portfolios in the presence of market friction using the geometric approach developed in the second part. It contains a study of viscosity solutions of a multidimensional HJB equation. Special attention is paid to the two-asset model, for which the structure of optimal control is described, together with findings on the asymptotic behavior of solutions for vanishing transaction costs.

The appendix provides a toolbox containing auxiliary results from various branches of mathematics used in the book.

“This book contains an introduction to the mathematical theory of financial markets with proportional transaction costs. … This is the first book that covers this subject and thus is very useful for scientists and researchers on this field. One can find useful information in the bibliographical comments at the end of the book, and in the appendix there are results from convex analysis that are used for some of the proofs, an introduction to the Skorokhod problem and stochastic differential equations with reflections.” (Nikolaos Halidias, Zentralblatt MATH, Vol. 1186, 2010)

“It is the first book to compile the results from a substantial body of literature coherently in a single volume, and thus may be valuable to researchers looking for a theoretical foundation for their models. … the authors have incorporated up-to-date results. … Kabanov and Safarin have succeeded in creating the first book to summarize some of the major contributions in the mathematical finance literature on proportional transaction costs. … I recommend it as a stepping stone to the research field of transaction costs.”­­­ (Evert Wipplinger, Financial Markets and Portfolio Management, Vol. 25, 2011)