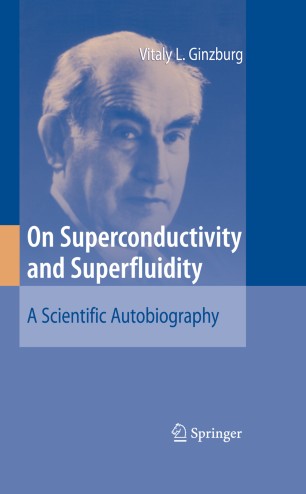 On Superconductivity and Superfluidity

This book presents the Nobel Laureate Vitaly Ginzburg's views on the development in the field of superconductivity. It contains a selection of Ginzburg's key writings, including his amended version of the Nobel lecture in Physics 2003. Also included are an expanded autobiography, which was written for the Nobel Committee, an article entitled "A Scientific Autobiography: An Attempt," a fundamental article co-written with L.D. Landau entitled "To the theory of superconductivity," an expanded review article "Superconductivity and superfluidity (what was done and what was not done)," and some newly written short articles about superconductivity and related subjects. So, in toto, presented here are the personal contributions of Ginzburg, that resulted in the Nobel Prize, in the context of his scientific biography.

V. L. Ginzburg is the author of several hundreds papers and many books including: Theoretical Physics and Astrophysics (Pergamon Press, 1979); Waynflete Lectures of Physics (Pergamon Press, 1983); Origin of Cosmic Rays (with S. I. Syrovatskii, Pergamon Press, 1964); Propagation of electromagnetic waves in plasma (Pergamon Press, 1970); Transition radiation and Transition Scattering (with V. N. Tsytovich, Adam Hilger Publ. House, 1990); Crystal Optics with Spatial Dispersion and Excitons (with V. M. Agranovich, Springer-Verlag, 1984), Physics and Astrophysics. A selection of key problems (Pergamon Press, 1985); On Physics and Astrophysics (in Russian, Publ. House "Nauka", Moscow, 1992; Publ. House "Quantum", Moscow, 1995). About Science, Myself and Others (in Russian, Publ. House "Nauka", Moscow, 1997), The Physics of a Lifetime (Reflections on the Problems and Personalities of 20th Century Physics) (in English, published by Springer 2001), About Science, Myself and Others (in Russian, 3rd edition, "FizMatLit" Publishing House, 2003), About Science, Myself and Others (in English, Institute of Physics Publishing, 2005), "Superconductivity and Superfluidity. An Autobiography." (in Russian, "FizMatLit" Publishing House, 2006).

“Ginzburg’s final book, On Superconductivity and Superfluidity: A Scientific Autobiography, contains his 2003 Physics Nobel Prize lecture, his views on contemporary scientific and political issues, and his contributions to physics, particularly to his two favorite fields, mentioned in the book’s title. … The general public will find Ginzburg’s personal views interesting … . the book is intended for people with a physical-science or mathematical education.” (Valery Pokrovsky, Physics Today, January, 2010)

“The volume under review presents Vitaly Ginzburg’s personal impressions on the development in the field of superconductivity. The present book contains a selection of Ginzburg’s key writings, including his amended version of the Nobel lecture in Physics 2003. … The book is intended for people with a physical-science or mathematical education and the readers will find Vitaly Ginzburg’s personal views as very interesting.” (Vicenţiu D. Rădulescu, Zentralblatt MATH, Vol. 1205, 2011)