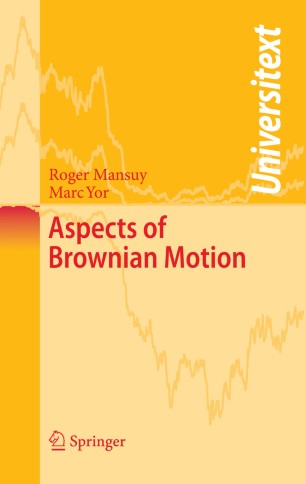 Stochastic calculus and excursion theory are very efficient tools to obtain either exact or asymptotic results about Brownian motion and related processes. The emphasis of this book is on special classes of such Brownian functionals as:

- Gaussian subspaces of the Gaussian space of Brownian motion;

- Time spent by Brownian motion below a multiple of its one-sided supremum.

Besides its obvious audience of students and lecturers the book also addresses the interests of researchers from core probability theory out to applied fields such as polymer physics and mathematical finance.

MARC YOR has been Professor at the Laboratoire de Probabilités et Modèles Aléatoires at the Université Pierre et Marie Curie, Paris, since 1981, and a member of the Académie des Sciences de Paris since 2003. His research interests – which are well illustrated in the present book – bear upon properties of Brownian functionals, either for pure or applied purposes. Recently, Marc Yor has also been working on the interface between number theory and random matrices.

ROGER MANSUY has been teaching mathematics at the Lycée Louis le Grand, Paris, since 2006. He has been working with Marc Yor – who was the supervisor of Roger Mansuy’s PhD thesis – in recent years. Prior to the present volume he and Marc Yor collaborated in publishing volume 1873 of the series Lecture Notes in Mathematics entitled "Random Times and Enlargements of Filtration in a Brownian setting".

“The reader will marvel at the authors’ knowledge and expertise. … the book makes clear that although the mathematical study of Brownian motion is almost one hundred years old, the directions for continued study and new investigations remain unlimited.” (Michael B. Marcus, Bulletin of the American Mathematical Society, Vol. 48 (3), July, 2011)
Buy options