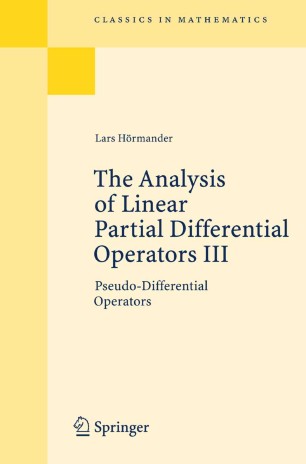 "Volumes III and IV complete L. Hörmander's treatise on linear partial differential equations. They constitute the most complete and up-to-date account of this subject, by the author who has dominated it and made the most significant contributions in the last decades.....It is a superb book, which must be present in every mathematical library, and an indispensable tool for all - young and old - interested in the theory of partial differential operators."
L. Boutet de Monvel in Bulletin of the American Mathematical Society, 1987

"This treatise is outstanding in every respect and must be counted among the great books in mathematics. It is certainly no easy reading (...) but a careful study is extremely rewarding for its wealth of ideas and techniques and the beauty of presentation."
J. Brüning in Zentralblatt MATH, 1987

Born on January 24, 1931, on the southern coast of Sweden, Lars Hörmander did his secondary schooling as well as his undergraduate and doctoral studies in Lund. His principle teacher and adviser at the University of Lund was Marcel Riesz until he returned, then Lars Gårding. In 1956 he worked in the USA, at the universities of Chicago, Kansas, Minnesota and New York, before returning to a chair at the University of Stockholm. He remained a frequent visitor to the US, particularly to Stanford and was Professor at the IAS, Princeton from 1964 to 1968. In 1968 he accepted a chair at the University of Lund, Sweden, where, today, he is Emeritus Professor.

Hörmander’s lifetime work has been devoted to the study of partial differential equations and its applications in complex analysis. In 1962 he was awarded the Fields Medal for his contributions to the general theory of linear partial differential operators. His book Linear Partial Differential Operators published 1963 by Springer in the Grundlehren series was the first major account of this theory. Hid four volume text The Analysis of Linear Partial Differential Operators published in the same series 20 years later illustrates the vast expansion of the subject in that period.