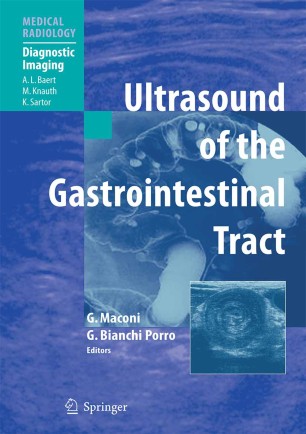 Ultrasound of the Gastrointestinal Tract

Each chapter provides a description of the findings obtained with ultrasound imaging, with inclusion of alternative diagnostic imaging methods for comparative purposes. Specific technical developments and applications of ultrasound relevant to studies of the gastrointestinal tract, such as functional and 3D ultrasound, contrast agents and operative ultrasound, are also discussed.

All authors are considered authorities in their specific fields, and the book includes many high-quality illustrations and the most up-to-date information.

Born in 1964. Graduated from Pavia University and received his Medical Degree in 1989. Specialized in Gastroenterology at the Catholic University of Rome in 1993.

Since December 2002 he is lecturer in Gastroenterology at the University of Milan.

Thanks to his extensive research activities, he was awarded at young clinician program at World Congress of Gastroenterology, Vienna, in 1998.

Author and co-author of over 70 scientific papers, mostly on Ultrasound and Gastroenterology and particularly on the role of bowel ultrasound in chronic inflammatory bowel diseases.

Born in Forli, Italy. Graduated from Milan University and received his Medical Degree in 1962.

"A comprehensive overview of the subject, including common and rare bowel pathology. They have enlisted an international group of authors to provide a wide base of clinical experience. … The text is well designed and edited so that there is a consistent style throughout. The chapters are extensively illustrated, and the quality of the ultrasound images is predominately excellent. Each chapter is well referenced. … This book would be a useful addition to a department library … ." (G. Avery, Diseases of the Colon and Rectum, Vol. 51 (6), 2008)