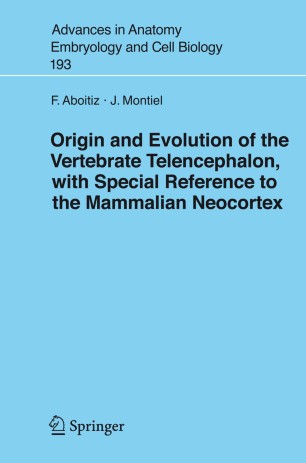 Origin and Evolution of the Vertebrate Telencephalon, with Special Reference to the Mammalian Neocortex

1 Introduction There is little doubt that the vertebrate brain is the most complex structure we know. As with any complex structure, there is the immediate question about its origins. Howcouldsuchacomplexdesigndevelopfromthesimplestmulticellular animals? This problem has pervaded the study of evolutionary biology since its beginnings. Although Darwin (1859, 1871) proposed an impeccable mechanism (natural selection) for the gradual transformation of species including human origins, even he sometimes expressed certain doubts about the origin of highly complex structures. This issue has been highly debated both within science and outsideit. Forinstance,arebirthoftheoldreligiousargumentofintelligentdesign has gained unexpected strength in the last few years. In essence, this argument follows Paley’s (1802) claim that if we ?nd a clock that has been thrown away we cannotconsiderthatitwascreatedonitsown,butratherhastobetheconsequence of conscious design. Today, creationists have developed a modern version of this argument, that of “intelligent information” (Denton 2002). For example, after sequencing the human genome in 2001, one of Celera Genomics top computer scientistsclaimedthatthiscomplexitysuggesteddesign. Althoughheclari?ednot to be thinking of God, he asserted that “there’s a huge intelligence there” (quoted inWitham2002,p9). AsWitham(2002)says,moderncomputer-literatebelievers may soon ask the question of whether the universe is self-running or functioning on DOS, a Divine Operating System. Inthisvolume,wehavedecidedtotackletheproblemoftheoriginandevolution of the vertebrate brain, from the simplest nervous system-like elements that we can observe in nature. In doing so, we expect to establish a continuity between the simplest stages and the elaboration of the highly intricate neuronal network that is the mammalian cerebral cortex.