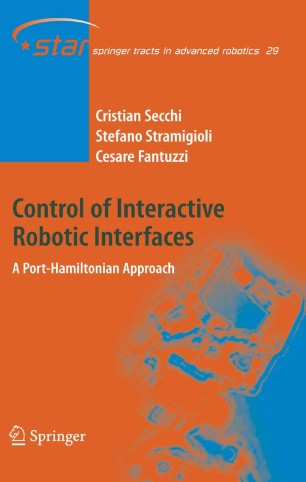 When two physical systems (e.g. a robot and its environment) interact they exchange energy through localized ports and, in order to control their interaction, it is necessary to control the exchanged energy.

The port-Hamiltonian formalism provides a general framework for modeling physical systems based on the concepts of energy, interconnection and power ports which describe the phenomena of energy storage, energy exchange and external interaction respectively.

"This book deals with the important problem of modeling and controlling the interaction between two physical systems—from one side the robot and from the other side its environment. … It is a suitable tool to formally model physical systems based on the energy concept and its relations. The authors introduce the energy-based control to the modeling and controlling phase of interactive robotics interfaces. … The theoretical considerations and solutions are well interpreted with some practical examples." (Aleksander Michal Nawrat, Mathematical Reviews, Issue 2008 f)