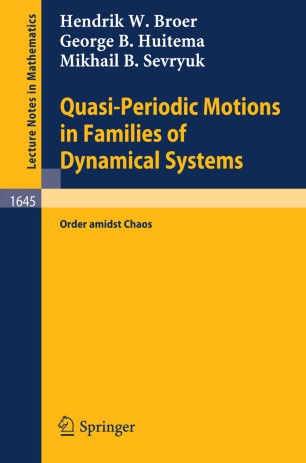 This book is devoted to the phenomenon of quasi-periodic motion in dynamical systems. Such a motion in the phase space densely fills up an invariant torus. This phenomenon is most familiar from Hamiltonian dynamics. Hamiltonian systems are well known for their use in modelling the dynamics related to frictionless mechanics, including the planetary and lunar motions. In this context the general picture appears to be as follows. On the one hand, Hamiltonian systems occur that are in complete order: these are the integrable systems where all motion is confined to invariant tori. On the other hand, systems exist that are entirely chaotic on each energy level. In between we know systems that, being sufficiently small perturbations of integrable ones, exhibit coexistence of order (invariant tori carrying quasi-periodic dynamics) and chaos (the so called stochastic layers). The Kolmogorov-Arnol'd-Moser (KAM) theory on quasi-periodic motions tells us that the occurrence of such motions is open within the class of all Hamiltonian systems: in other words, it is a phenomenon persistent under small Hamiltonian perturbations. Moreover, generally, for any such system the union of quasi-periodic tori in the phase space is a nowhere dense set of positive Lebesgue measure, a so called Cantor family. This fact implies that open classes of Hamiltonian systems exist that are not ergodic. The main aim of the book is to study the changes in this picture when other classes of systems - or contexts - are considered.