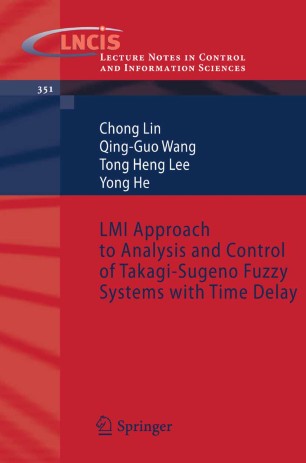 SinceinitiatedbyLot?A. Zadehin1965,fuzzysettheoryhastriggeredacons- erably large body of areas to blossom. A fuzzy system is, in a very broad sense, anyfuzzylogic-basedsystemwherefuzzylogiccanbeusedeither asthebasisfor the representation of di?erent forms of system knowledge or the model for the interactions and relationships among the system variables. Fuzzy systems have proven to be an important tool for modeling complex systems for which, due to complexity or imprecision, classical tools are unsuccessful. There have been diverse ?elds of applications of fuzzy technology from medicine to management, from engineering to behavioral science, from vehicle control to computational linguistics, and so on. Fuzzy modeling is a conjunction to understand the s- tem’s behavior and build useful mathematical models. Di?erent types of fuzzy models have been proposed in the literature, among which the Takagi-Sugeno (T-S) fuzzy model is a rule-based one suitable for the accurate approximation and identi?cation of a wide class of nonlinear systems. There has been an - creasing amount of work on analysis and synthesis of fuzzy systems based on T-S fuzzy models. Since 2000, T-S fuzzy model approach has been extended to tackleanalysisandcontrolproblemsofnonlinear systemswith time delay. So far extensive results have been presented for investigating T-S fuzzy systems with time delay, many of which adopt an easy and popular scheme, say, linear matrix inequality (LMI) based method. However, there lacks of a monograph in this direction to provide the state-of-the-art of coverage of this new growing area.