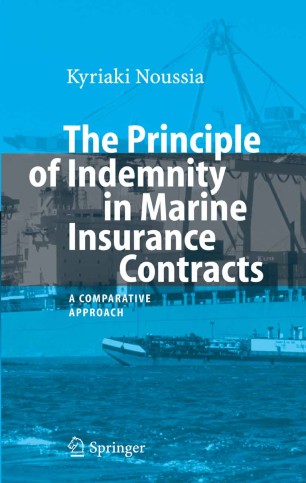 The Principle of Indemnity in Marine Insurance Contracts

Marine Insurance is considered one of the oldest of the many forms of commercial protection. It has flourished through the establishment of the institution of the ''coffee-houses'', wherein ''underwriting" was being conducted and from where the evolution and dominance of the Lloyd's has stemmed as the world's most famous insurance market. Marine insurance contracts are special in that they have special characteristics and also be­ cause they are contracts of indemnity. This book examines the principle of indemnity within marine in­ surance contracts. The legal problems related to the principle, in theory and in practice, are discussed and evaluated through the citation and criti­ cal analysis of the relevant case law in England as well in some of the most representative common law and continental law jurisdictions, together with an analysis comprising thoughts and proposals on possible extensions, fur­ ther research options, and a possible fiiture law reform. The book comprises of six (6) chapters: chapter one (1) discusses the history of marine insurance in England and the policy reasoning behind the enactment of the various English statutes as well as the history, legal framework and the way marine insurance is regulated in the other jurisdic­ tions. Chapter two (2) discusses the concept and importance of insurable interest in relation to indemnity marine insurance contracts and the cove­ rage offered under such contracts both in England and in the other legal systems.