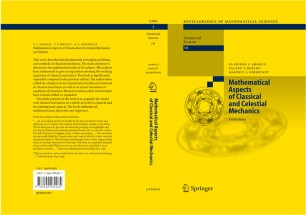 In this book we describe the basic principles, problems, and methods of cl- sical mechanics. Our main attention is devoted to the mathematical side of the subject. Although the physical background of the models considered here and the applied aspects of the phenomena studied in this book are explored to a considerably lesser extent, we have tried to set forth ?rst and foremost the “working” apparatus of classical mechanics. This apparatus is contained mainly in Chapters 1, 3, 5, 6, and 8. Chapter 1 is devoted to the basic mathematical models of classical - chanics that are usually used for describing the motion of real mechanical systems. Special attention is given to the study of motion with constraints and to the problems of realization of constraints in dynamics. In Chapter 3 we discuss symmetry groups of mechanical systems and the corresponding conservation laws. We also expound various aspects of ord- reduction theory for systems with symmetries, which is often used in appli- tions. Chapter 4 is devoted to variational principles and methods of classical mechanics. They allow one, in particular, to obtain non-trivial results on the existence of periodic trajectories. Special attention is given to the case where the region of possible motion has a non-empty boundary. Applications of the variational methods to the theory of stability of motion are indicated.

2001 A.M.Lyapunov Prize of  Russian Academy of Sciences (joint with D.V.Anosov))

From the reviews of the previous editions: "... As an encyclopaedia article, this book does not seek to serve as a textbook, nor to replace the original articles whose results it describes. The book's goal is to provide an overview, pointing out highlights and unsolved problems, and putting individual results into a coherent context. It is full of historical nuggets, many of them surprising. ... The examples are especially helpful; if a particular topic seems difficult, a later example frequently tames it. The writing is refreshingly direct, never degenerating into a vocabulary lesson for its own sake. The book accomplishes the goals it has set for itself. While it is not an introduction to the field, it is an excellent overview. ..." American Mathematical Monthly, Nov. 1989 "This is a book to curl up with in front of a fire on a cold winter's evening. ..." SIAM Reviews, Sept. 1989

"Mathematical Aspects of Classical and Celestial Mechanics is the third volume of Dynamical Systems section of Springer’s Encyclopaedia of Mathematical sciences. … if you wanted an idea of the broad scope of classical mechanics, this is a good place to visit. One advantage of the present book is that the authors are particularly skilled in balancing rigor with physical intuition. … The authors provide an extensive bibliography and a well-selected set of recommended readings. Overall, this is a thoroughly professional offering." (William J. Satzer, MathDL, January, 2007)

"The new edition is a considerable updating of the last. … it is a reference for experts that will pull them back from their narrow subarea of expertise, give them a vast overview of what other experts know, and send them to the references if they actually want to be able to use something. … In conclusion, this is a book that every mathematical library must own and that many experts will want to have on their shelves." (James Murdock, SIAM Review, Vol. 49 (4), 2007)

"This book is the third English edition of an already classical piece devoted to classical mechanics as a whole, in its traditional and contemporary aspects … . The book is significantly expanded with respect to its previous editions … enriching further its already important contribution of acquainting mathematicians, physicists and engineers with the subject. … New chapters on variational principles and tensor invariants were added, making the book more self-contained. … Its purpose is to serve as a detailed guide on the subject … ." (Ernesto A. Lacomba, Mathematical Reviews, Issue 2008 a)