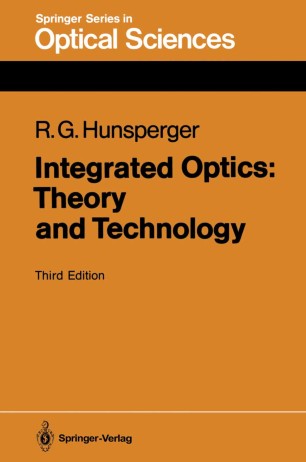 Professor Hunsperger's Integrated Optics is one of the few texts that is comprehensive and thorough enough for use both as a classroom text (practice problems are included) and as a specialist's reference. The gratifying success of the first two editions and the continuing rapid development of the field necessitated the writing of this third edition. All chapters have been revised and updated, and a new chapter, on quantum well devices, has been added. As in the previous editions, detailed descriptions of the phenomena, devices, and technology used in optical integrated circuits and their relationship to fiber optics are presented. The trend of telecommunications toward the use of single mode systems operating at the longer wavelengths of 1.3 and 1.55 µm is explained and documented with illustrations of recently developed devices and systems. Broader coverage of GaInAsP devices and optical integrated circuits is provided, and the new growth tech- niques of molecular beam epitaxy (MBE) and metal-organic chemical vapor deposition (MOCVD) are described. A discussion of the extensive development of hybrid optical integrated circuits in lithium niobate is also included. From the reviews: I never had the opportunity of using Hunsperger as a text to teach from but after reading the present third edition, I think it must be a pleasure to do so. It is a good book because of its precise language and its didactic organization (with many clear tables), it is exhaustive in its details, and rigorous in its background; it is well suited for a graduate-level course.