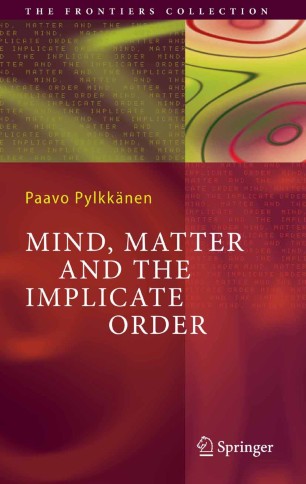 Mind, Matter and the Implicate Order

Quantum theory predicts experimental results brilliantly but simultaneously raises difficult conceptual issues. Paradoxes such as Schrödinger’s cat, the EPR paradox, or the nonlocality demanded by Bell’s inequalities have hampered philosophers in their attempts to include quantum theory when discussing the relation between mind and matter. Pylkkänen proposes that Bohm’s alternative interpretation of quantum theory resolves these paradoxes and thus enables one to base new philosophical theories upon quantum physics. He uses Bohm’s concepts of "implicate order", "active information" and "soma-significance" as tools to tackle several well-known problems in the philosophy of mind. These include mental causation, the hard problem of consciousness, time consciousness, and virtual reality. Pylkkänen’s eclectic approach combines new physics-based insights with those of analytical philosophy, phenomenology, cognitive science and neuroscience and he proposes a view in which the mechanistic framework of classical physics and neuroscience is complemented by a more holistic underlying framework in which conscious experience finds its place more naturally.

"This is an excellent addition to Springer’s (equally excellent) Frontiers Collection. … I can highly recommend it to philosophers (of mind), philosophers of various sciences, physicists, (especially those working in foundation of physics), and anyone interested in the contemporary debate on consciousness. It would also provide a good way to become acquainted with the more difficult of Bohn’s later ideas. The book assumes no prior knowledge of quantum mechanics." (Dean Rickles, Mathematical Reviews, Issue, 2007 g)