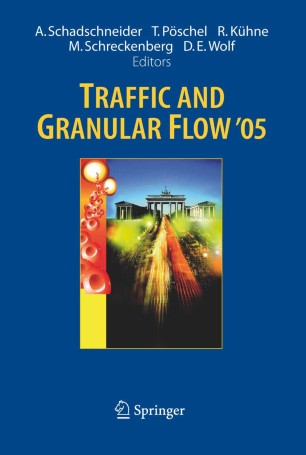 The conference series Tra?c and Granular Flow has been established in 1995 and has since then been held biannually. At that time, the investigation of granular materials and tra?c was still somewhat exotic and was just starting to become popular among physicists. Originally the idea behind this conference series was to facilitate the c- vergence of the two ?elds, inspired by the similarities of certain phenomena and the use of similar theoretical methods. However, in recent years it has become clear that probably the di?erences between the two systems are much more interesting than the similarities. Nevertheless, the importance of various interrelations among these ?elds is still growing. The workshop continues to o?er an opportunity to stimulate this interdisciplinary research. Over the years the spectrum of topics has become much broader and has included also problems related to topics ranging from social dynamics to - ology. The conference manages to bring together people with rather di?erent background, ranging from engineering to physics, mathematics and computer science. Also the full range of scienti?c tools is represented with presentations of empirical, experimental, theoretical and mathematical work. TheworkshoponTra?candGranularFlow’05wasthesixthinthisseries. Previous conferences were held in Julic ¨ h (1995), Duisburg (1997), Stuttgart (1999), Nagoya (2001), and Delft (2003). For its 10th anniversary, Berlin was chosen as location, the largest city and capital of Germany. Berlin is also one ofthecentersfortransportrelatedresearchandhostsmanyresearchinstitutes that have a long history in the ?elds covered by the workshop.