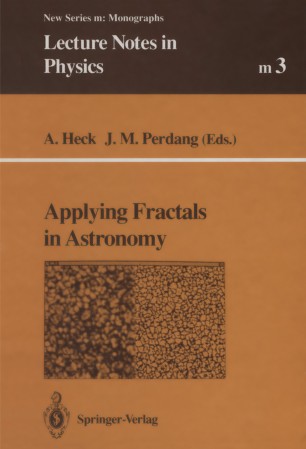 'Fractal geometry addressesitselfto questions that many people have been asking themselves. It con­ cerns an aspect of Nature that almost everybody had been conscious of, but could not address in a formal fashion. ' 'Fractal geometry seems to be the proper language to describe the complezity of many very compli­ cated shapes around us. ' (Mandelbrot, 1990a) 'I believe that fractals respond to a profound un­ easiness in man. ' (Mandelbrot, 1990b) The catchword fractal, ever since it was coined by Mandelbrot (1975) to refer to a class of abstract mathematical objects that were already known at the turn ofthe 19th century, has found an unprecedented resonance both inside and outside the scientific community. Fractal concepts, far more than the concepts of catastrophe theory introduced a few years earlier, are currently being applied not only in the physical sciences, but also in biology and medicine (Goldberger and West 1987). In the mid-eighties, Kadanoff (1986) asked the question: 'Why all the fuss about /ractals'! '. He offered a twofold answer: in the first place, it is 'because of the practical, technological importance of fractal objects'. Indeed he emphasised the relevance of these structures for materials scientists and oil drilling engineers, in search of structures with novel properties, or models for the flow of oil through the soil. His second answer was: 'Because of the intellectual interest of fractals '.