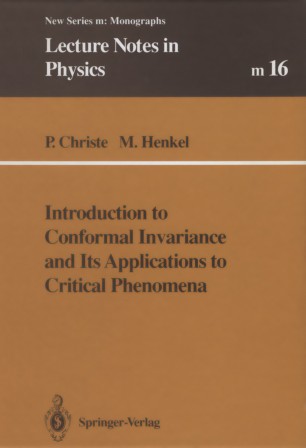 Introduction to Conformal Invariance and Its Applications to Critical Phenomena

The history of critical phenomena goes back to the year 1869 when Andrews discovered the critical point of carbon dioxide, located at about 31°C and 73 atmospheres pressure. In the neighborhood ofthis point the carbon dioxide was observed to become opalescent, that is, light is strongly scattered. This is nowadays interpreted as comingfrom the strong fluctuations of the system close to the critical point. Subsequently, a wide varietyofphysicalsystems were realized to display critical points as well. Ofparticular importance was the observation of a critical point in ferromagnetic iron by Curie. Further examples include multicomponent fluids and alloys, superfluids, superconductors, polymers and may even extend to the quark-gluon plasmaand the early universe as a whole. Early theoretical investigationstried to reduce the problem to a very small number of degrees of freedom, such as the van der Waals equation and mean field approximations and culminating in Landau's general theory of critical phenomena. In a dramatic development, Onsager's exact solutionofthe two-dimensional Ising model made clear the important role of the critical fluctuations. Their role was taken into account in the subsequent developments leading to the scaling theories of critical phenomena and the renormalization group. These developements have achieved a precise description of the close neighborhood of the critical point and results are often in good agreement with experiments. In contrast to the general understanding a century ago, the presence of fluctuations on all length scales at a critical point is today emphasized.