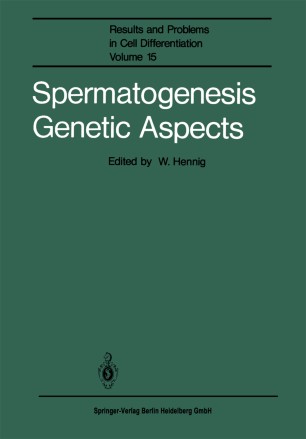 Part of the Results and Problems in Cell Differentiation book series (RESULTS, volume 15)

Spermatogenesis is one of the fundamental but at the same time also one of the most complex differentiation processes in higher eukaryotes. For a long time the development of spermatozoa has been considered as related solely to the needs of transfer of the paternal genome into the egg. Other paternal contributions to the development of the embryo were not seriously considered. Only recently has it become evident, from studies of mouse embryonic development by Solter and colleagues, that also the paternal genome carries regulatory information into the zygote since the development of a mouse embryo requires the presence of the maternal as well as of the paternal pronucleus. This means that we have to pay more attention to the development of male gametes, since the imprinting of the paternal genome obviously required for the early embryonic development must occur during male gamete development. Despite the fundamental character of sperm development as a cellular differentiation process, no coherent concepts for studies of this process exist. Many morphological, and in particular ultrastructural, details of sperm devel­ opment and sperm structure are known, but this knowledge has not been assembled into a consistent picture reflecting the basic features of this differ­ entiation process. One of the reasons for the failure to construct such a picture is the fact that also the genetics of sperm development is poorly developed. For elaborating concepts of early embryonic development the study of mutants has been, and still is, indispensible.