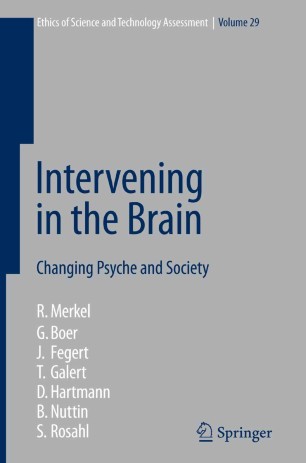 Intervening in the Brain

Part of the Ethics of Science and Technology Assessment book series (ETHICSSCI, volume 29)

The preceding decade has witnessed tremendous progress in clinical as well as theoretical neuroscience. In its wake, powerful new instruments of neuromodulation acting directly on the brain have been developed: potent neuro-pharmaceuticals, deep brain stimulation, transcranial magnetic stimulation, various methods of neurotransplantation, central neural prostheses, and others. However, few areas of scientific development seem to exhibit as close a connection between dreams of progress and nightmares of disaster as contemporary neuroscience. This Janus-faced character relates to the core function of the brain as the "organ of the mind". Methods of intervening in the brain easily draw the suspicion of possibly altering fundamental features of personhood, thus posing a threat to preconditions of human dignity and to the normative structure of our societies. This suspicion has been fuelled by the discovery that most of the newly developed neurotherapeutic instruments might also be used for purposes of enhancement of certain mental features. "Mind doping" is a populist slogan at hand, suggesting a deprecatory parallel to the practice of doping in sports.

The present book subjects the whole range of questions associated with these problems to a thorough exploration. Extensive state-of-the-art accounts of the relevant clinical and theoretical neurosciences are followed by an in-depth philosophical analysis of the problems of personal identity and a comprehensive disquisition on legal and ethical questions posed by present and foreseeable future practices of neuroenhancement. A concluding chapter presents the study’s main results as recommendations, addressing clinical practitioners and researchers in the field as well as to politicians, legislators, law courts, philosophers, lawyers, and anybody fascinated by or concerned about the dawning era of intervening in the brain.