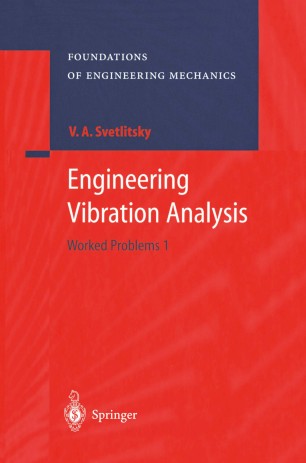 The two-volume work "Engineering Vibration Analysis" is devoted to problems on vibration theory analysis, which is currently one of the fundamental courses in mechanical engineering departments at technical universities.

The first volume is devoted to systems with a finite number of degrees of freedom and continuous systems are analyzed in the second. In the first part of each volume problems are posed and in the second part the detailed solutions to these problems are dealt with. Conventional and advanced problems requiring deeper knowledge of the vibration theory are analyzed. In particular, problems are formulated associated with the determination of frequencies and vibration modes, the study of free and forced vibrations, as well as with parametric and nonlinear vibration analysis. The problems associated with determination of critical parameters, dynamic stability and with random vibrations are also considered. The algorithms for their solutions are presented with probability characteristics calculation, and a reliability estimation (probability of non-failure operation) of the corresponding mechanical system.

When placed in the context of a mechanical or aerospace engineering program at a typical US university, the worked example problems in these … texts are very advanced. … could be incorporated into both undergraduate and graduate level vibrations courses, as well as a graduate level non-linear vibrations course." (Sally A. McInerny and Stanley E. Jones, International Journal of Acoustics and Vibration, Vol. 10 (4), 2006)

"The book is a collection of problems concerned with vibrations of systems with finite number of degrees of freedom. The formulated problems are associated with determination of frequencies and forms of vibrations, with the analysis of forced vibrations, and with the investigation of stable and unstable vibrations. The book may be regarded as a problem book for students and engineers working in the area of vibrations of engineering structures." (Yuri N.Sankin, Zentralblatt MATH, Vol. 1123 (1), 2008)