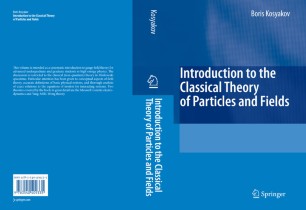 Introduction to the Classical Theory of Particles and Fields

"The classical theory of gauge fields is an important subject that has numerous applications in modern physics. … A nice feature of this book is that this is self contained. All the necessary definitions as well as the technical tools are provided by the author in the main body of the book. … I enjoyed reading the book. … Overall the monograph … can be warmly recommended to any serious student of electrodynamics and gauge theory and to their instructors alike." (Yuri N. Obukhov, Annalen der Physik, Vol. 16 (12), 2007)

"Each chapter contains problems and final notes, a useful guide to the history of the subject. … The volume is intended to be an introduction for advanced undergraduate and graduate students in high energy physics. … We mention that it is timely elaborate a unified view of the classical self-interaction problems in classical gauge theories with particular reference to the electrodynamics of point electrons and Yang-Mills interaction of point quarks. The present work is a valuable contribution to this task." (Petre P. Teodorescu, Zentralblatt MATH, Vol. 1114 (16), 2007)

"This book is an introduction to classical field theory. Although it was designed for advanced undergraduate and graduate students, researchers could also benefit from this book. It is intended for mathematical physicists and theoretical physicists. Classical gauge theories are discussed in detail, with great emphasis on self-interactions. … In summary, this is a useful introduction to classical gauge theories that can be recommended both to students (theoretical or mathematical physics), and to specialists and researchers, as a reference book." (Giuseppe Nardelli, Mathematical Reviews, Issue 2008 c)