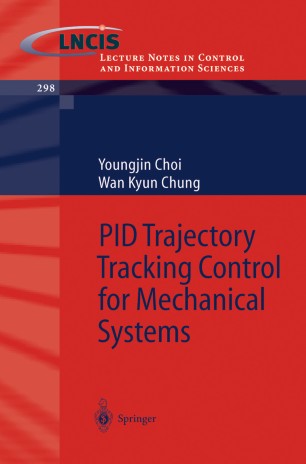 Though PID control has a long history as much as its life force since Ziegler and Nichols published the empirical tuning rules in 1942, surprisingly, it has never been changed in the structure itself. The strength of PID control lies in the simplicity, lucid meaning, and clear e?ect. Though it must be a widely - cepted controller for mechanical control systems, it is still short of theoretical bases,e.g., optimality, performance tuning rules, automatic performance t- ing method, and output feedback PID control have not been clearly presented formechanicalcontrolsystems.Thesesubjectswillbethoroughlydiscussedin this book. There are many books of PID controller for the purpose of process control, but it is hard to ?nd a book on the characteristics of PID control for mechanical systems. In the ?rst place, when nonlinear optimal control theory is applied to mechanical systems, a class of Hamilton-Jacobi (HJ) equations is derived as a result of optimization. There are two methods to solve a class of HJ eq- tions: a direct method using an approximation and inverse method ?nding the performance index from a class of HJ equations. Also, there are two control methods according to the objective: the set-point regulation control and t- jectory tracking control. The trajectory tracking control is basically di?erent from set-point regulation one in that the desired con?guration, velocity and acceleration pro?les according to time progress are added to the motion of mechanical system. This book is focusing on an inverse optimization method and the trajectory tracking control system.