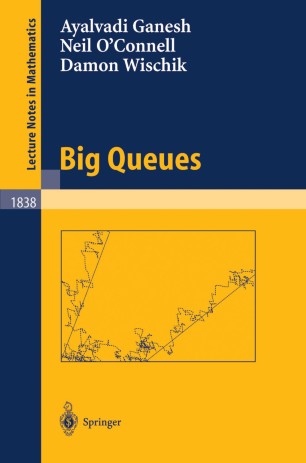 A. Ganesh: I graduated from the Indian Institute of Technology, Madras, in 1988. I received my MS and PhD in Electrical Engineering from Cornell University in 1991 and 1995 respectively. My PhD thesis was on the use of large deviation techniques in queueing theory. I worked at Edinburgh University, Birkbeck College, London and Hewlett-Packard's Basic Research Institute in Mathematical Sciences (BRIMS) before joining Microsoft Research in March 1999. I am a Fellow of King's College, Cambridge.

Neil O'Connell: BA (Gold Medal) (1989) and MSc in Statistics (1990) from Trinity College Dublin. PhD in Statistics (1993) from University of California, Berkeley. Postdocs at Edinburgh University and Dublin Institure for Advanced Studies, then a University Lecturer in Statistics at Trinity College Dublin, then a visiting professor at Dublin Institute for Advanced Studies. Lead researcher at BRIMS (Basic Research Institute in the Mathematical Sciences, at Hewkett-Packard Labs in Bristol) from its inception (1994-2000). Now a lecturer at Warwick University. Neil has received three EPSRC CASE awards, and an HP patent award.

Damon Wischik: BA (1995) in Mathematics at Cambridge, followed by a PhD (1999). Currently a Research Fellow at Trinity College, Cambridge. Spent a year as a postdoc in the Electrical Engineering department at Stanford University.