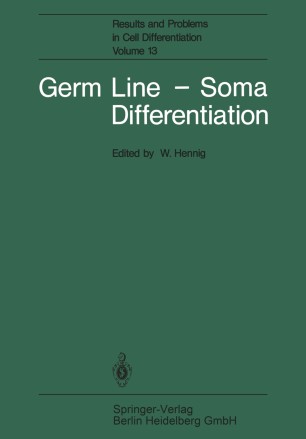 Part of the Results and Problems in Cell Differentiation book series (RESULTS, volume 13)

One of the oldest problems in developmental biology is the differentiation between germ line and somatic cells. The continuity of germ line cells between subsequent generations of multicellular organisms was first suggested by Owen, and later elaborated by A. Weismann to his famous germ line theory. His additional assumption that cellular differentiation was based on a differential representation of the genetic material in somatic cells was soon disproved. In some, apparently exceptional, cases, however, such differences in the genetic material between germ line and somatic cells were discovered. The best-known example is the nematod Ascaris. Boveri discovered and studied the fundamental differences in the karyotypes of germ line and soma of Parascaris equorum. Later, similar situations were found in some other organisms. However, in particular the work ofSpemann demonstrated that cellular differentiation in general is not accompanied by fundamental changes of the genetic material. Subsequently, the relatively few examples of germ line-soma differences achieved by chromatin elimination processes have been considered as a curiosity. Experimental studies have been essentially restricted to Ascaris species and to the pioneering cytological studies of chromatin elimination by S. Beermann. Despite the large proportions of the genome involved in chromatin elimina­ tion, our knowledge of this process is still very restricted. In particular the biological meaning of this differentiation process is entirely obscure. In this context one must, however, consider that also for the majority of DNA sequences in eukaryotic genomes the biological relevance is unclear.