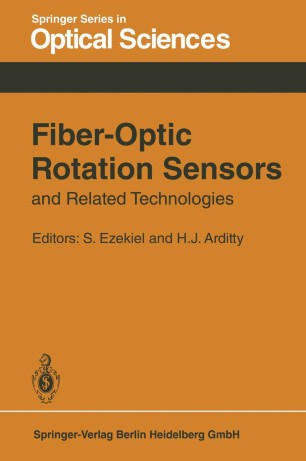 Currently there is considerable interest in the application of optical meth­ ods for the measurement of absolute rotation. Active approaches, so-called ring laser gyros, have been under serious development for at least 15 years. More recently, passive approaches using ring resonators or multi turn fiber interferometers have also demonstrated much pro~ise. The only previous conference devoted exclusively to optical rotation sensors, held in 1978 in San Diego, California, was organized by the Society of Photo-optical Instru­ mentation Engineers(S.P.I.E.J. Although the main emphasis at that conference was on ring laser gyros, a number of papers were also included that described the early development of fiber gyroscopes. Since then the field of fiber optic rotation sensors has grown so rapidly that a conference devoted primarily to this subject was needed. The First International Conference on Fiber-Optic Rotation Sensors was held at the Massachusetts Institute of Technology, Cambridge, Massachusetts, Nove~­ ber 9-11, 1981. The purpose of the conference was to bring together the ~any researchers and interested personnel from universities, industry, and govern­ ment to discuss and exchange ideas on the many recent developments in fiber­ optic rotation sensors and related technologies. The program consisted of tutorial papers as well as invited and contributed papers.