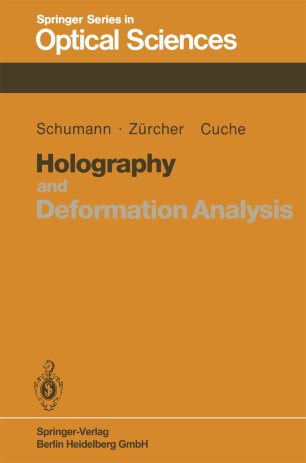 In this book series on Optical Sciences, holography has been the subject of three previous volumes. In particular, Vol. 16, written by one of us (W. S. ) and Dr. M. Dubas, treated holographic interferometry of opaque bodies from the standpoint of deformation analysis. However, the fundamental principles of holography are developed there only briefly in preparation for a discussion of interference fringe modifications. This new volume in the series is intended to consider in detail many topics which were previously omitted, such as the deformation or distortion of holo­ graphic images, the theory of volume holograms, composite or multiplex holo­ graphy, holographic interferometry of transparent media, time dependent effects, holographic contouring, and applications of fringe modifications to the deformation of opaque bodies. In addition, these and other subjects will be treated with the same unifying concept developed in Vol. 16, but with an addi­ tional emphasis on those features that have their origins in classical optics, espe­ cially the small-wavelength approach, the coupled-wave theory, and the Seidel aberrations. Since the field of holography and its various applications is growing rapidly, it is impossible to be comprehensive in a single book. Every effort has beep. made to avoid unnecessary duplication of Vol. 16. For example, displace­ ment and fringe localization problems are only briefly discussed, while some modification techniques (e. g. , sandwich holography) are not included. When needed, however, the reader is directly referred to complementary publications.