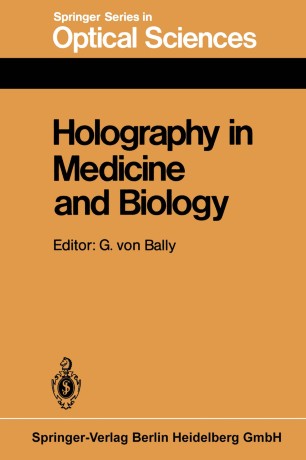 Holography in Medicine and Biology

The International Workshop on Holography in Medicine and Biology was held in MUnster, Federal Republic of Germany, on March 14th and 15th, 1979, at the Clinic of Otorhinolaryngology of the Westfalische Wilhelms-Universitat within the frame of the Symposium 79 of the Sonderforschungsbereich 88 "Teratology and Rehabilitation of Patients with Multiple Handicaps'' of the Deutsche Forschungsgemeinschaft. In fact, this workshop was not the first meeting dealing exclusively with biomedical applications of holography and related techniques. The very first symposium in this field was organized by Prof. P. Greguss and took place in New York in 1973. A second one was held in MUnster in 1976 with the objec­ tive to improve the communication among the at that time rather isolatedly working groups in this research domain. The great response to that meeting gave encouragement to the organization of another one in MUnster, this time on a more extended international base. Thus, this workshop attracted 85 scientists from 13 countries, i.e. Austria, Brazil, Czechoslovakia, Fed. Rep. of Germany, France, Great Britain, Hungary, Japan, Norway, Sweden, The Netherlands, USA, Yugoslavia.