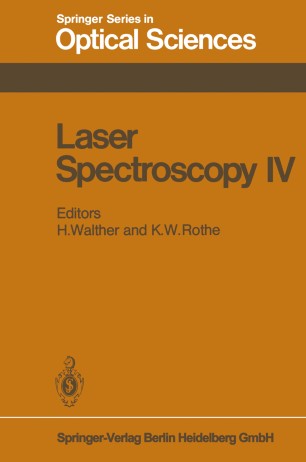 The Fourth International Conference on Laser Spectroscopy (FICOLS) was held in the Hotel Oberfahrt in Rottach-Egern, Tegernsee, June 11-15, 1979. Rottach-Egern is a well-known health resort situated on the southern end of Lake Tegernsee. As with the previous laser spectroscopy conferences in Vail, Megeve, and Jackson, the purpose of FICOLS was to provide ~n informal setting where an international group of scientists active in laser spectroscopy could discuss current problems and developments in the field. The program consisted essen­ tially of invited lectures with appropriate time provided for the latest postdeadline results. The conference was attended by 340 scientists representing 25 countries: Austria, Australia, Brazil, Canada,- Peoples Re­ public of China, Denmark, Finland, France, Germany (FRG), Germany (GDR), Great Britain, India, Italy, Japan, Nether­ lands, New Zealand, Norway, Pakistan, Poland, Spain, Sweden, Switzerland, U.S.k,, U.S.S.R., and Yugoslavia. Unfortunately five of our colleagues from Japan who planned to attend the meeting could not come due to an interruption of airline schedules, Their absence was a distinct loss to the conference. However, their papers will be published in one of the forthcoming issues of the journal Applied Physics. Numerous people have contributed to making the conference a success. Especially we would like to thank the members of the steering committee for their advice concerning the program.