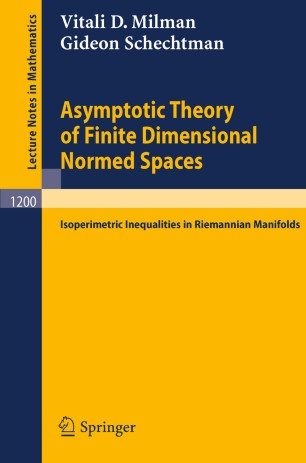 This book deals with the geometrical structure of finite dimensional normed spaces, as the dimension grows to infinity. This is a part of what came to be known as the Local Theory of Banach Spaces (this name was derived from the fact that in its first stages, this theory dealt mainly with relating the structure of infinite dimensional Banach spaces to the structure of their lattice of finite dimensional subspaces). Our purpose in this book is to introduce the reader to some of the results, problems, and mainly methods developed in the Local Theory, in the last few years. This by no means is a complete survey of this wide area. Some of the main topics we do not discuss here are mentioned in the Notes and Remarks section. Several books appeared recently or are going to appear shortly, which cover much of the material not covered in this book. Among these are Pisier's [Pis6] where factorization theorems related to Grothendieck's theorem are extensively discussed, and Tomczak-Jaegermann's [T-Jl] where operator ideals and distances between finite dimensional normed spaces are studied in detail. Another related book is Pietch's [Pie].