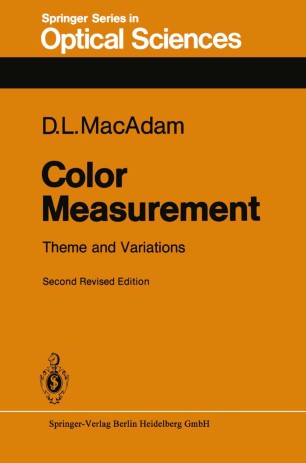 Reviews and use of the first edition as the textbook for a senior-division uni­ versity course indicated the need for a number of corrections and clarifica­ tions. Although no new topics have been introduced, the new edition should be more clear and useful. A novelty in the Notes and Sources Appendix should facilitate reference from the notes back to the text. Far that purpose, the page number of the text to which each note refers is indicated in square brackets following the serial number of the note. The FMC1 color-difference formula has been substituted everywhere for the Friele-MacAdam formula, including the reference to the sources in Note 52. The FMC1 formula was actually used in the investigations reviewed in Sects. 8.3 and 8.4. The Friele-MacAdam formula given on page 151 of the first edition, which I thought was equivalent to the FMC1, was erroneous and should not be used. The formulas for the geodesic chromaticity diagram, on p. 153 of the first edition, were based on observations by 14 normal observers (last reference in Note 51). They have been replaced by the formulas based on the observations of PON, for consistency with all other formulas and discussions in the book. Figure 8.29 in the first edition was based on the PON data and on the formulas printed below it in the new edition. Therefore, Fig. 8.29 is un­ changed.