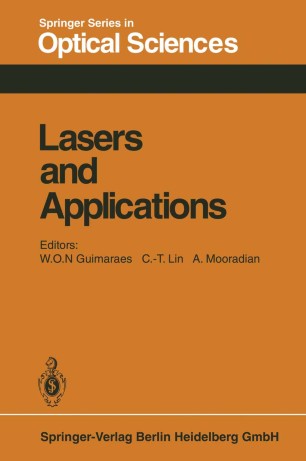 The International Conference on Lasers and Applications was held in Rio de Janeiro, Brazil from 29 June to 3 July 1980. This conference was held to commemorate the memory of Professor Sergio Porto who died suddenly about one year earlier while attending a laser conference in the Soviet Union. The sub­ ject matter covered the active areas of laser devices, photochemistry, non­ linear optics, high-resolution spectroscopy, photokinetics, photobiology, photomedicine, optical communication, optical bistability, and Raman spec­ troscopy. The conference was attended by over 150 people including scientists from Japan, France, England, West Germany, Norway, Italy, Brazil, Chile, Argentina, India, Canada, and the United States. Amemorial session attended by members of the Porto family and ranking Brazilian government dignitaries preceded the start of the conference. The location of the conference in Rio de Janeiro, Brazil, was chosen be­ cause it was in the homeland of Sergio Porto and provided an opportunity for his friends, colleagues, and countryrnen to pay hornage to hirn. The setting on Copacabana Beach afforded access to the lovely beaches, restaurants, and nightlife of one of the most beautiful and exciting cities of the world. There were tours of the city together with a banquet that featured a performance by one of the best Samba Schools in Rio. Financial support from many sponsors in Brazil and the United States is gratefully acknowledged in making this working conference a fitting tribute to the memory of Professor S.P.S. Porto.