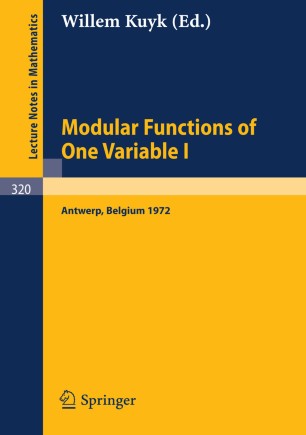 Modular Functions of One Variable I

An international Summer School on: "Modular functions of one variable and arithmetical applications" took place at RUCA, Antwerp University, from July 17 to - gust 3, 1972. This book is the first volume (in a series of four) of the Proceedings of the Summer School. It includes the basic course given by A. Ogg, and several other papers with a strong analyt~c flavour. Volume 2 contains the courses of R. P. Langlands (l-adic rep­ resentations) and P. Deligne (modular schemes - representations of GL ) and papers on related topics. 2 Volume 3 is devoted to p-adic properties of modular forms and applications to l-adic representations and zeta functions. Volume 4 collects various material on elliptic curves, includ­ ing numerical tables. The School was a NATO Advanced Study Institute, and the orga­ nizers want to thank NATO for its major subvention. Further support, in various forms, was received from IBM Belgium, the Coca-Cola Co. of Belgium, Rank Xerox Belgium, the Fort Food Co. of Belgium, and NSF Washington, D.C•• We extend our warm­ est thanks to all of them, as well as to RUCA and the local staff (not forgetting hostesses and secretaries!) who did such an excellent job.