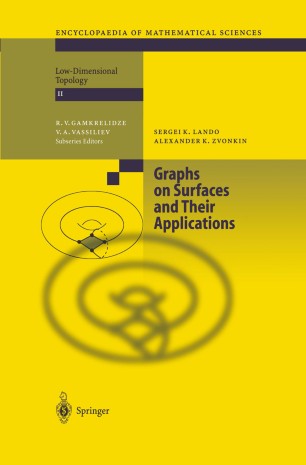 Graphs on Surfaces and Their Applications

Graphs drawn on two-dimensional surfaces have always attracted researchers by their beauty and by the variety of difficult questions to which they give rise. The theory of such embedded graphs, which long seemed rather isolated, has witnessed the appearance of entirely unexpected new applications in recent decades, ranging from Galois theory to quantum gravity models, and has become a kind of a focus of a vast field of research. The book provides an accessible introduction to this new domain, including such topics as coverings of Riemann surfaces, the Galois group action on embedded graphs (Grothendieck's theory of "dessins d'enfants"), the matrix integral method, moduli spaces of curves, the topology of meromorphic functions, and combinatorial aspects of Vassiliev's knot invariants and, in an appendix by Don Zagier, the use of finite group representation theory. The presentation is concrete throughout, with numerous figures, examples (including computer calculations) and exercises, and should appeal to both graduate students and researchers.