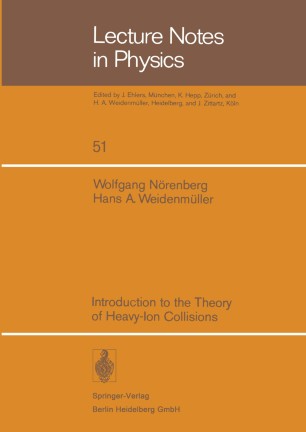 Introduction to the Theory of Heavy-Ion Collisions

With the advent of heavy-ion reactions, nuclear physics has acquired a new frontier. The new heavy-ion sources operating at electrostatic accelerators and the high-energy experiments performed at Berkeley, Dubna, Manchester and Orsay, have opened up the field, and have shown us impressive new prospects. The new accelerators now under construction at Berlin, Daresbury and Darmstadt, as well as those under consideration (GANIL, Oak Ridge, etc. ) are expected to add significantly to our knowledge and understanding of nuclear properties. This applies not only to such exotic topics as the existence and lifetimes of superheavy elements, or the possibil­ ity of shock waves in nuclei, but also to such more mundane issues as high-spin states, new regions of deformed nuclei and friction forces. The field promises not only to produce a rich variety of interesting phenomena, but also to have wide-spread theoretical implications. Heavy-ion reactions are characterized by the large masses of the fragments, as well as the high total energy and the large total angular momentum typically involved in the collision. A purely quantum-mechanical description of such a collision process may be too complicated to be either possible or inter­ esting. We expect and, in some cases,know that the classical limit, the limit of geometrical optics, a quantum-statistical or a hydrodynamical description correctly account for typical features.