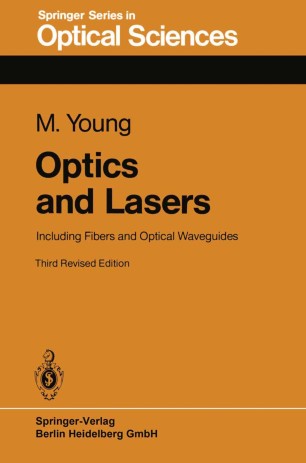 Including Fibers and Optical Waveguides

In this newest edition of Optics and Lasers, I have added a substantial number of problems and moved most of the older ones to the end of the book. There are now about one hundred problems, which, I hope, will make the book more useful in the classroom. As before, some of the problems derive an espe­ cially important or useful result; these I have left integrated within the body of the book. In such cases, I state the result and, often, give it an equation number and a citation in the index. Teachers who adopt the book may obtain solutions to the problems by asking me for them on letterhead stationery. In addition, I have rewritten over a dozen paragraphs to improve their clarity or precision and, further , corrected minor errors of punctuation and taken care of other such small details. The field of optics has been changing greatly for almost two dozen years. Partly because of the applied or engineering nature of much of modern optics, there has been a need for a practical text that surveys the entire field. Such a book should not be a classical-optics text, but, rather , it should be strong on principles, applications and instrumentation, on lasers, holography and coherent light, and on optical-fiber waveguides. On the other hand, it should concern itself relatively little with such admittedly interesting phenomena as the formation of the rainbow or the precise determination of the speed of light.